The startup landscape in Vietnam saw 67 investments last year, representing a whopping 130 per cent increase over 2014, said a report by a local incubator, Topica Founder Institute (TFI). However, majority of the deals were undisclosed.

“67 is the number that we have data, or information with trusted sources, both announced and undisclosed. There could be more deals,” the incubator said. The volume of investments has kept growing over the past five years, from only 10 transactions in 2011.

In addition, there was one big undisclosed 8-digit series A investment last year, TFI revealed.

Overseas investors accounted for 48 per cent of the total angel and seed stage deals. TFI said, it hoped to see more serious investors from overseas in 2016, along with more series C and D rounds, even as 2015 witnessed a higher number of series C investments.

A number of six acquisitions happened in 2015, most of which involved with foreign companies. The largest buyout in terms of value was the $260 million takeover of health tracker producer Misfit by American watchmaker Fossil Group. 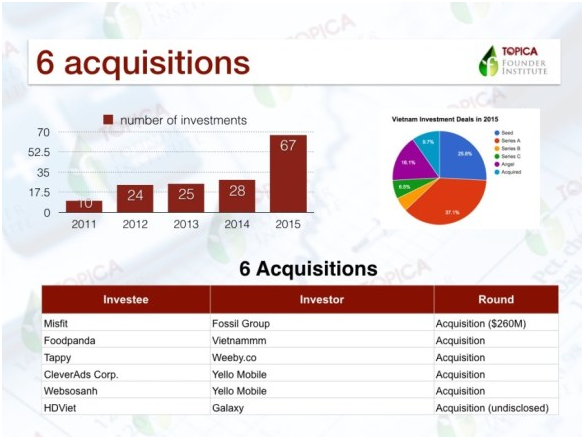 Overall, series A rounds accounted for the largest proportion (37.1 per cent) of the deal landscape last year, followed by seed funding with 25.5 per cent. Series B and C rounds took up the lowest level of some 6.5 per cent each, while acquisitions made up 9.7 per cent.

Among the industries, e-commerce (23 per cent), media (24.6 per cent), fintech (9.8 per cent) and edtech (4.9 per cent) were the top four sectors cornering majority of investments.

According to Mai Duy Quang, co-director of the TFI, edtech is on the trend of investment, while fintech has got more attention from venture capitalists than before.

“As per technologies developed for the agriculture sector, startups are challenged to make difference because large, established firms have also rolled out their own play,” he said. Navigating into the ancillaries for agriculture might be much easier to raise fund, he added.

Giving outlook for 2016, TFI said as the startup ecosystem has been heated up, more exits and more Vietnamese angels will likely be on the horizon.

According to the report, local startups are being supported by nine incubators and accelerators, in addition to five government initiatives. Investors are diverse in seed to series B stages, from global VCs to domestic corporations and first generation startups. 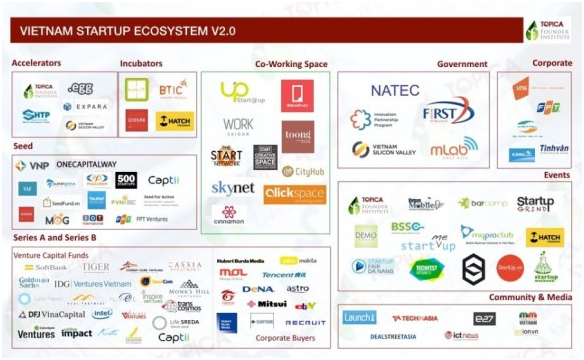