My last week in Vietnam in Ho Chi Minh City was markedly different from my week in Hanoi in ways I did not expect. A spirit of entrepreneurship and optimism about the future of education in Vietnam has been palpable.

I met with several entrepreneurs in Ho Chi Minh City. While I also met some entrepreneurs in Hanoi, they had mostly created new private schools. Here the entrepreneurs with whom I met are creating a variety of companies, including online learning providers, after-school programs, and an open education resource platform.

Perhaps the clearest example of launching a successful education disruption among my meetings, Topica offered an inspiring view into the power of online learning to expand rapidly higher education access in Vietnam. As its founder, Pham Minh Tuan, said, disruption is the only hope for Vietnam to provide the higher education capacity that the country needs, and online learning that leverages professionals in the work as its teachers is the only chance to close the gap between the academy and the workforce—a gap that has been talked about in Vietnam for decades. Topica employs a Pearson  Embanet-type model of partnering with existing universities to create online degree offerings, generally for working adults, a classic area of nonconsumption. Today it has five local university partners and serves 15,000 students with its 300 teachers. It also has a partnership with a university in the Philippines and is building a larger presence throughout Southeast Asia. Finally, Topica appears to be developing high-quality programs, as its retention and graduation metrics rank it in the same range as the top four online programs in the United States.

The team at Everest Education has two centers that are geared to helping students prepare for an international education by offering them test prep and English and math tutoring. They have developed a curriculum that focuses on inspiring students to help them develop skills in critical thinking, creativity, communication, and collaboration. I spent a lot of time during the week with the founding team and leadership—Tony Ngo, Don Le, and Hieu Le—as they set up several meetings for me in Vietnam. I gave a workshop to the staff on disruptive innovation and blended learning, and what struck me was how much the team is focused not just on delivering education for a small population that wants to study overseas, but also on transforming education across the country to make it more personalized and mastery-based by leveraging blended learning. The innovations that they make in the years ahead will be worth watching.

Conducting a workshop for the team at Everest Education on disruptive innovation and blended learning. Photo by Tracy Kim Horn.

The Yola Institute founders with whom I met tried initially to launch an online learning company aimed at English language learning, but it did not take off because of poor infrastructure and the consumers were not ready, they concluded. Instead, in 2009 they launched the first of their now three centers to serve students preparing for standardized tests, like the SAT. Yola’s program is not simply test prep, however, as the team is building a unique curriculum that helps students build the technical skills for the test; indirect technical skills in the form of general knowledge and self-learning techniques; and nontechnical skills in the form of character development, motivation, and determination. Their new textbooks that they are unveiling are built not only to inspire students, but also to inspire teachers to teach, as the teachers will continually learn from it as well and not “deliver” a pre-baked lesson, they said. 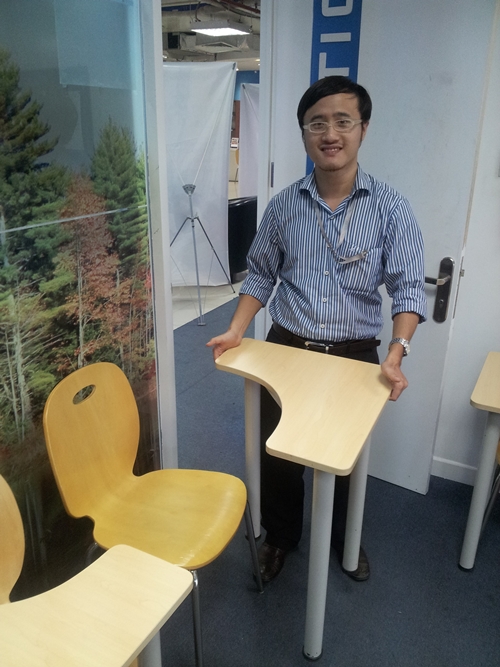 Duy Phan, CFO of Yola Institute, showing off the modular desks he and his team designed that allow Yola to create a variety of arrangements for individual and group learning. Photo by Michael B. Horn

RISE utilizes technology and a server-based English curriculum in an innovative model for Asia that uses no native English speakers to provide students with an immersive English education in other subjects at roughly $7 an hour. The center was alive with spirit and 5- and 6-year olds speaking fluent English. Many of those students had entered with no English skills. The center is growing fast, as it now serves over 200 students with a curriculum designed to serve students through age 15. 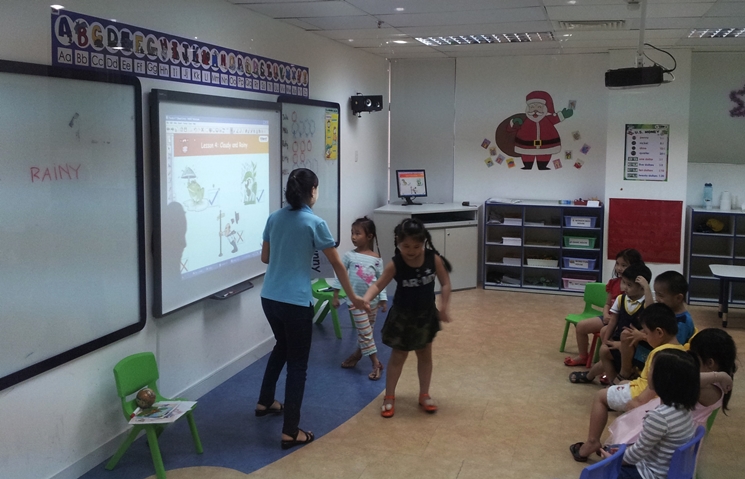 A classroom at RISE, an English and life skills learning program. Photo by Michael B. Horn

RISE is working in another big area of nonconsumption: English language learning. Particularly in rural public schools but in all schools, finding competent English teachers—let alone native English speakers—is challenging. Yet Vietnam is making a big push for the population to master English to make an even bigger impact in the global business world. While in Ho Chi Minh City, I met up with Jacob Stiglitz, whose company Rockit is seeking to help fill this gap with its online learning language solution. 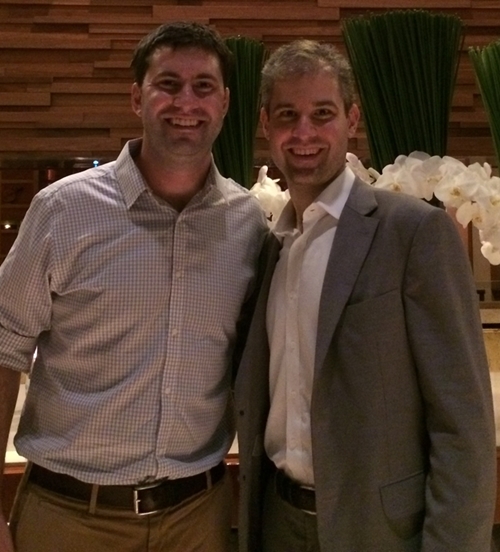 Lastly, I met with Kien Pham, who started the Vietnam Foundation in 2008 to create Vietnam Open Education Resources (VOER), which, according to Kien, has made Vietnam the second ranked country in OER behind the United States. With over 20,000 one-hour modules online from college professors around the country, VOER attracts 40,000 unique visitors per day, he said. The platform allows people to quickly snap together modules to create new textbooks at a price of $2.50, significantly lower than a typical textbook at $100. The textbooks offer an “edited by” credential to whomever snaps them together, which can offer young, time-strapped professors prestige, Kien said. Over the last two years, the team has built a new platform, called Hanoi Spring, that Kien predicts will begin to revolutionize the OER world—and education more generally—in Vietnam.

The entrepreneurs with whom I met in Vietnam were not only working in the education space. With organizations like the Global Shapers—a collection of young professionals in Ho Chi Minh City supported by the World Economic Forum—seeking to boost entrepreneurship, there is an emerging dynamism in Vietnam focused on doing well by doing good for the country. The entrepreneurs face tough obstacles, including a variety of regulatory hurdles, but with a patient, long-term view of the challenges, the entrepreneurs seem up to the task.