What makes his achievement even more remarkable is that he accomplished the four years of work while serving as the primary caregiver for his partially disabled mother.

The Dean's List student credits his mom, Kalisa Surdi, with enabling his achievement.

"She emphasized self-learning," Miles said, "that I should learn to teach myself and pursue my education at my volition rather than the influence of others."

Surdi, selected to speak at Saint Leo's commencement on May 1, represented his class of 676 graduates from the university's Center for Online Learning. 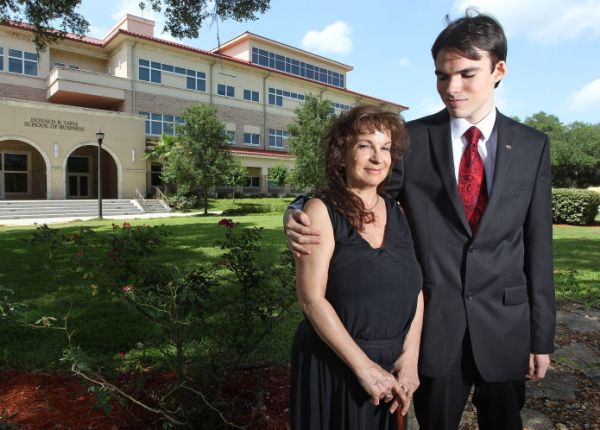 Kalisa Surdi was the main force propelling Miles to college, schooling him at their Weeki Wachee home through his middle and senior high school years to a diploma endorsed by the Hernando School District.

While her body was debilitated, her mind was not impaired, and was brimming with self determination.

Her father had wanted to see his daughters attend and graduate from Saint Leo. But he died at an early age, and his goal went unachieved.

Miles became the first member of his family to graduate from Saint Leo.

Paralyzed from the neck down from a surgery gone awry when Miles was an 18-month-old toddler, his mother persevered through constant therapies and now is able to walk short distances with a cane, even drive a car.

Meanwhile, Miles from an early age took on such chores as house cleaning, cooking and minor home maintenance. Continuing today, he helps his mother work through daily physical exercises.

"She has good days and bad days," he said. "She tries to do what she can when she can. I help her in getting around."

Mindful of his mother's needs and his own educational goals, Surdi said, "I did take a full course load, but I strategically selected courses to manage my other responsibilities."

With a sizable number of alternative courses available, he put together each semester's schedule, including one "intense" class, one that would demand 40 hours of study a week, along with other less time-consuming courses.

"Once, I took two months off (for a summer) and found out I did best to take courses back to back so I stayed in a learning mode," he said.

In most cases, he achieved top grades, graduating with a 3.981 grade-point average.

"You can ask questions (via computer), and profs respond within 24 hours mostly. There were live chats. They also have a phone line so you can schedule a call. I never had an issue reaching out to an instructor."

Surdi noted that he would teach himself many of the course concepts before contacting his teachers, "so I learned to be proactive with lots of instructors."

As for bypassing the campus experience, he said, "I missed that somewhat, but it was out of the question to leave my mother at home."

Saint Leo's online center facilitates student-to-student interaction with extracurricular clubs in their fields of interest. Surdi joined and was named president during his senior year of the Pacioli Accounting Club, with which he intends to continue contact.

In his commencement address, Surdi said, "We have accomplished a great deal on our own that was at least partly because of the influence of others. Now, it's our turn.

"We must exercise the knowledge we have acquired in ways that are morally and socially responsible to positively influence others."

He envisions that for himself, particularly "being ethically responsive," when he begins his first career job June 1 as a tax processor specialist in Tampa with PricewaterhouseCoopers, an international professional services firm.

Enthusiastic about the job, Surdi added, "I was just absolutely thrilled" at graduation. "I want to eventually pursue a graduate degree."